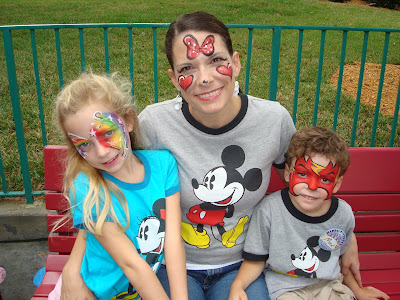 Several days ago, my family and I returned from 5 days at the happiest place on earth. Disneyworld. Land of enchanted bliss. Land where every phone call ends with, “Have a magical day!” Land of no laundry, no e-mail, no cooking, and no overflowing garbage cans. Land where Sleeping Beauty, Mary Poppins, and Minnie Mouse are your neighbors. I love this place. And I especially love my very fun-loving and generous in-laws who provided such a sweet vacation for us all.
I realize that everyone does not heart the happiest place on earth like I do. I am well aware of the critics and nay-sayers. It’s over-priced and contrived. It’s an obnoxious beacon of capitalism on steroids shining for all the world to see. It reduces the entire world and all the diversity therein to a cheesey, musical boat-ride. It’s a small world after all yet Disney manages to make it even smaller by clothing singing wooden children in garb representing their nationality and a few token icons like a glittery Eiffel Tower or a pinata. I realize all of this. In fact, I’ve even read the book. Back when I was a heady graduate student working on my PhD, I took a course entitled “European and American Consumer Culture.” It was a fantastic class. I read great books and got to write sophisticated papers. One book, however, was not fantastic. It was a scathing diatribe of my beloved happiest place on earth. It was an over-intellectualized, completely ridiculous, mean-spirited expose of Disney, no doubt written by PhD’s trying to compensate for not being fun by being mean and hating capitalism.
Luckily the critics did not quash my appreciation and love for contrived, make-believe worlds where I can dine at a castle, wear glitter on my face, eat mouse-shaped ice-cream bars, and ride a roller-coaster through Mt. Everest all in one day. The Man loves this place at least as much as I do. And the kids? Well, they cried (Brownie actually wept) as we left the Magic Kingdom.
Curiously, however, I noticed more than a few ironies during my 5-day stay. Decked out 4-year-old princesses with an ice-cream bar in one hand, a stuffed Minnie in the other, having a hissy fit because some tiny detail of her agenda in this magical place evidently went awry. Parents yelling at their children (at the happiest place on earth.) Children having complete meltdowns over anything and everything. Apparently, the happiest place on earth has not yet found a cure for overtired, overstimulated (and overspent) parents and children who have indulged in illegal amounts of sugar. Hence, I often observed quite a bit of unhappiness at the happiest place on earth. Interesting, don’t you think?
So, I’m still a little bummed to be back amid the laundry, dishes, to-do lists, and never-ending tasks of domesticity. Sort of like Cinderella the day after the ball, nose-to-the-grindstone and waiting hand and foot on her wicked stepmother and evil stepsisters. Obviously I don’t have the two latter things but I do have 3 children. And I homeschool. So, I’m pretty much even with her. I tried my best to smuggle a fairy godmother out of the park–you know, as a souvenir of sorts. But evidently there are laws against that sort of thing. So it’s just me vs. laundry and the children…again. And I’m losing…again.
Have a magical day!