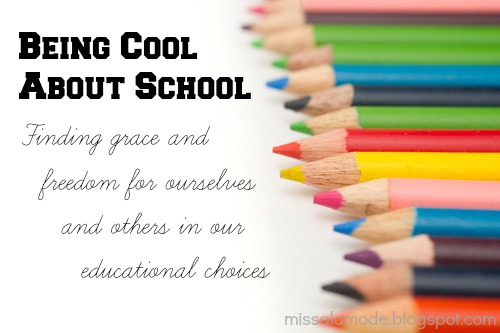 This the second post in a series. You can read the first post here. To pin the image above, simply hover over the center of the picture.

I began stressing about the education of my children before they were born. I wish I was joking.

Though I’ve only been a mom for twelve-and-a-half years, educating my children has been somewhat of a preoccupation for probably eighteen years, about the time I got married. Some of you probably think that’s insane. And some of you can totally relate.

We welcomed our first child into the world in 2001. Within a few years I had determined how I wanted to educate her and any additional children we’d have.

What sort of educational utopia did I have in mind? A private, classical, Christian school. Preferably one with uniforms. It would be a safe, secure, and rigorous place for her to learn. Naturally, we would be part of a lovely community of like-minded parents and our beloved daughter would become a prodigy, what with reading classical texts and memorizing the history of the world and such. Plus she would receive sound theological instruction and remain protected from the “unsavory” influences of the masses.

Sure, private school would be expensive but by that point, we’d hopefully be able to afford it. Perhaps my own college teaching career could even help fund our children’s education. I told myself that if anything is worth investing in, surely it’s education. Surely we would make it work because surely this was the right way to go and surely God would bless and provide for such an honorable and noble endeavor.

Apparently I was sure about a lot back then. It makes me cringe to see those long-ago expectations written out in black and white. I’m so grateful God does not always give us what we think we want. 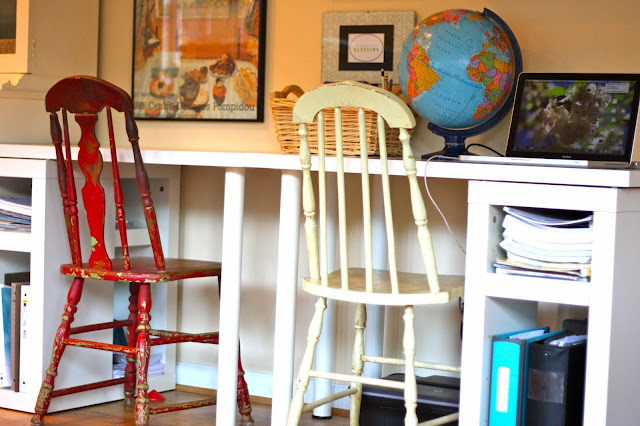 My dear husband was so not stressing about this. Yes, he is smart. Yes, he cares about education. He’s an economics professor; obviously he cares. But he did not have a specific vision of how it should look. He is a pragmatist, thank the Lord, and not the high-strung idealist that I am. He assumed that whatever route we chose, it would most likely be fine.

Looking back, I would have been wise to have sought his wisdom rather than “expert” opinions found on the internet and in books and among other parents. But because he wasn’t as worked up about the issue as I was, it pains me to tell you that I discounted his perspective and began the angst-ridden journey of figuring this out on my own.

By the time our daughter was school-age, life as I’d envisioned it was already shaky at best. But that’s another story. I traded in my three-quarter time position for full-time employment at the university where I worked. Many aspects of our lives seemed uncertain and my own full-time employment meant greater security.

We enrolled our daughter in a half-day, private kindergarten program but with my full-time job, we had to go with public school instead.

Looking back on it, my devastation was so unnecessary. Truly, it’s kind of embarrassing. Safe public schools are a luxury in many parts of the world but there I was lamenting this option like it was failure, all because it didn’t match up with my ideals.

I’ll never forget her first day of school in August of 2006 as we nervously walked down the kindergarten hallway.

My fragile self in heels, business attire, and a sensible tote.

And though our toddler son was safely situated in childcare, I was dealing with all sorts of guilt over that. I’m sure we looked polished and put together on that first day of school. The reality was anything but “together.”

I held back the bulk of the waterworks until I reached my van. And then I bawled on the way to work, blew my nose, touched up my make-up, and walked resolutely into a conference ballroom to do a presentation in front of the entire university faculty.

I did what I did best way back then: Soldiered on and pretended I was made of steel.

But after the presentation and faculty meeting, I went to my office, locked the door, loosened the ties of pretense, and wept at my desk.

This was not how life was supposed to look.

I did my job and I did it pretty well. But that was about all I could do. In the precious downtime I had as a full-time working mother of two young children, I slept and continued to cry “for no reason,” gradually slipping into depression by early winter. Navigating the difficulties of marriage, motherhood, full-time work and utter emotional depletion had taken its toll. I rested as much as I could. I went on medicine that helped. I did not want to keep working.

In January, right before classes began, I made one of the hardest decisions I’ve ever made: I quit a job that I loved but could no longer keep. It was freeing and heart-breaking and terrifying. Just like that, we said goodbye to half of our income and a career that had brought me great fulfillment and precious influence in the lives of college students.

We kept our daughter in school for the remainder of the school-year. During the next several months, I rested, went to Bible study and church, and spent copious amounts of time in the mornings with the Lord. This was a season of intense healing and renewal for me.

In late spring we found out I was pregnant with our third child and we were both ecstatic. Our son’s name means “mercy” because he was a living, breathing representation of God’s renewal, provision, and protection for our family. He represented a new beginning in every way.

I was preoccupied with two things during that pregnancy: Morning sickness. And what to do about school.

Though our daughter enjoyed a fabulous kindergarten year with a loving and wonderful teacher, public school was still not part of my perfect vision. With family on the mend and a new lease on life, I returned to my idealism about education. Why read Junie B. Jones when we could read Plato?

I anguished all summer over the decision. Private school was too expensive and there wasn’t one close enough anyway. We had two choices: Send her back to public school or homeschool.

Homeschool was something that seemed beautiful but unattainable. I loved the idea of living and learning together. I loved the freedom and flexibility it would provide. I loved the notion of teaching her what we deemed valuable and the idea of learning at her own pace rather than the state forcing its standards, expectations, and schedule on us.

But could I really educate my own kids? Though I had been an educator for the last eight years, I knew nothing about teaching little kids.

Would I have the patience?

Would I need a break?

Would we all drive each other crazy?

Would they be bored and hate me and wish they could go to school like “normal” kids?

At the last possible moment in August, I surrendered to what my heart really longed for and what I believed God was calling me to do: be with my children. Thankfully my husband supported this decision. I still doubted my ability to homeschool but I knew this was a calling and I trusted that God would equip me for the journey.

For the next {almost} five years, we did school at home.

Those were some crazy days. Still adjusting to life outside the work-force, I had three young children and did school with the oldest two while my hard-working husband taught every day and three nights a week. The littlest child remained attached to my hip or to the floor, likely adhered to the hardwoods by a rogue cup of spilled apple juice that had dripped through the cracks of our kitchen table / school desk.

Life was both messy and marvelous. Simpler, but in a chaotic sort of way.

We read books together, field-tripped together, ate every single meal together, often slept together {because I birthed the worst sleepers in the world}, rode everywhere together, and attended our weekly homeschool group together.

My only break from all of the “lovely” togetherness was early-morning running with my friend and the occasional restroom break. But not to shower of course. Showers were a luxury as well as a hazard. The littlest one, when not well-adhered to the wood floor by said apple juice, was prone to emptying the contents of entire bathroom drawers into the toilet when my back was turned.

But I wouldn’t have chosen anything else. After seven years as a working mom, my heart longed to be with my little ones. I wanted to reclaim the time I felt I’d lost. Graduate school, work, selfish ambition, and personal trials had, in a way, stolen me from my children.

I longed for us all to be fully present in one another’s lives and we definitely were. Much of the time it wasn’t pretty but it was real and sweet and I wouldn’t trade those years for anything.

I didn’t know what school and the future would look like and by year four, I became increasingly open to other options. In the distant future of course.

But as we began our last year of homeschooling, I had no idea that we were almost done. No idea whatsoever that we’d have only five more months of life and learning as we had known it for so long.

The idol of the ideal was still alive and well in my heart even though it was crumbling in the everyday trenches of our homeschool.

Sometimes God reroutes us in ways that feel like failure but are actually grace.

Being Cool About School:
Finding Grace & Freedom for Ourselves & Others in Our Educational Choices
{Whether We Teach Our Kids at Home,
in School, or on the Moon}

I invite you to read the first post in the series here.

Feel free to subscribe to the blog if you’d like to receive the rest of the series in your e-mail’s inbox. You can do that in the right sidebar. And you may unsubscribe anytime you like.