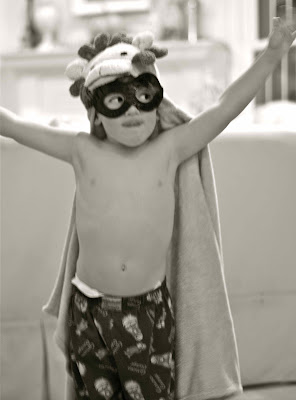 I got my funny back.

That was one of the ways I knew my marriage was healing from the deepest-down place and that change was happening from the inside-out.

I’ve always been the crazy one. {Which is ironic because I tend to take myself much too seriously.}

My senior year of high school, several of my Jewish friends dared me to steal a plastic Baby Jesus from a nativity scene while we were out one night. I put him back in the manger before the night was over. I may have been irreverent but I wasn’t a thief. “Good” Protestant girl and minister’s daughter that I was, I felt horribly guilty after the fact. At least I wasn’t Catholic. I’d still be going to confession over that one.

But the whole story reminds me that I’m a little nutty. I’m not an obvious clown but those who know me well know I’m all about the laughs. I used to be anyway.

My husband knows this best. I was silly and spontaneous and he was a quirky sort of jokester back in the day. He’s never rolled his eyes at my kookyness and he’s always given me permission to be who I am. Even through the hard times, I knew he appreciated that side of me.

Sadly, however, there were years on end when there wasn’t much of that side to appreciate. I’m not sure when or why but somewhere along the way I became terribly serious. Terribly. I had plenty to be sad about but still, it’s a real tragedy to lose the comedy in life. That’s what becoming a grown-up and dealing with seriously hard stuff will do to you.

Oh we still had our laughs from time to time but as the years wore on, I laughed less and frowned more. I didn’t look for the funny or try to be funny that often. The sorrow I felt hung around in the depths and instead of a wellspring of gladness, I exhibited a wellspring of negativity. He commented every now and then that I was too serious, that I’d lost my lightheartedness.

I didn’t want to admit that he was right but the truth was, I missed it too.

This year has been a difficult one. We’ve trudged through more than you care to know. And in doing so we’ve dug deeper, cried harder, talked ’til we were blue in the face, had a fair number of knock-down-drag-outs and finally, finally gotten to the root of so much.

There’s something about getting to the bottom of things that brings relief. And the relief brings freedom.

And apparently freedom brings the funny back. {Singing has returned as well but that’s another story.}

He’s noticed it too. We’ve both felt freer to be our crazy selves again and together we are having a lot of laughs. It may sound contrived, but I’m actually trying to be intentional about laughing it up. It is so good for the soul.

Whether it’s getting kids to bed early so we can watch a favorite comedy or belting out an insane song in the kitchen while I’m stirring spaghetti and he leasts expects it, it feels good to resurrect the funny after years of being far too sober-minded.

There’s something about laughing together that makes a relationship richer. I realize that funny can sometimes be a facade, a superficial mask to keep the real issues at bay. Funny isn’t a cure-all or a telltale sign that all is well.

But for us, it has been an unexpected sign of love blooming lighthearted again.