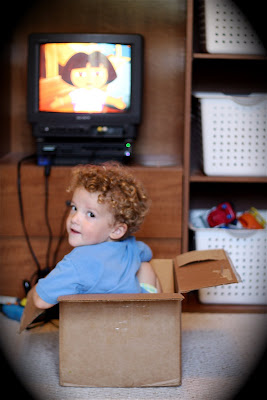 {This photo has nothing to do with the post but I needed a picture. I am not sure why Cupcake chose to watch Dora from the vantage point of a cardboard box.}

The “fantastic” thing about homeschooling is that every errand becomes a family affair, a field trip if you will. Today we all enjoyed an exciting field trip to the doctor because Blondie is sick.

Our pediatrician always scans the examination room and grins when we visit because it’s not everyday she sees four enthusiastic people in the same room when only one of them is ill. She also knows that she will be asked 1,142 questions by three of the four said people in a span of just 10 minutes.
Outings like this have a tendency to make this already tense mama just a teensy bit more high-strung…if that is possible. I never know how long we’ll sit in the waiting area or the subsequent examination room. {They call out names as if you’ve won a prize only to mock you and send you to someplace akin to Purgatory.} I also fear being vomited on by a child who is not my own.
And if that’s not enough, I have a tendency to promise that no one will get a shot because they do not give shots for things like ear infections, coughs, and sore throats when, in fact, sometimes they do. Lying to your children about their worst nightmare, getting shots, always makes one feel like a winner, does it not?
So you see, I am not a fan of the doctor’s office field trip. Today did not “disappoint.”
After they called our name and walked us to the holding tank, I noticed that Cupcake was not his normal bounding-down-the-hallway self. When we got to the threshold between the hallway and room, he stopped cold. He remembered that they poke innocent children here with sharp sticks. The nurse had no choice but to leave the door open as Cupcake looked on with fear and trepidation. Now a public spectacle, poor Blondie endured getting her throat swabbed and because none of my children will ever be martyrs, she cried somewhat excessively.
Cupcake got mad.
He interrogated the stunned nurse, “Why you do dat? You hurt Blondie! You don’t be mean to her! Don’t you eber do dat again!” And this, of course, got us all giggling and thankfully distracted Blondie from all of the drama and trauma.
We finally persuaded him to enter the room and the nurse
abandoned me
left us for the more exciting task of watching a strep culture.
And so the four of us just hung out in the room for a while {and by “while” I mean a lifetime.} The boys looked for anything they could climb on or spin upon. Blondie asked 376 times how long this was going to take. I wondered why they did not have a margarita vending machine in the hallway. Finally I pulled out the flashcards stashed in my purse, hoping we could get some of our review work accomplished while we waited.
It seems that Cupcake, in addition to knowing how to intimidate a nurse, also knows his English grammar.
After tugging on my sleeve excessively, I finally relented, “Okay buddy, it’s your turn. What are the 8 parts of speech?”
All 3 of us watched in amazement as he rattled off, “Nouns, Pronouns, Verbs, Adverbs, Conjunctions, Interjections, Prepositions, Adjectives.” I kid you not. I call this phenomenon “trickle-down education.” Apparently he is absorbing more than I realize as he plays with matchbox cars and knocks over trash-cans. He may prove to be the brightest {and meanest} one of the bunch.
{And y’all know that I do not usually exploit this blog to brag on my babies, but seriously, I felt compelled to share because it is both comical and a warning to be careful what you say around this kid. He repeats things with alarming accuracy.}
Because he is clearly a prodigy, he spent the rest of his time in the holding tank / Purgatory peeling all of the germ-infested and crusted-over stickers adorning the examination table and sticking them to himself. This task must have worn him out because he then chose to lay spread-eagle on the floor and do something like face-down snow angels {minus the snow} on the tile. I could literally see the staphylococcus setting up camp all over his hands.
So I did what any concerned mother would do. I let him eat a sucker on the way out.
This was after Blondie informed our inquiring pediatrician that she had band-aids all over her arm because Brownie told Cupcake to scratch her this morning…just for fun…and all of this went down while Mommy was taking a shower {and clearly not supervising the children.} She also told our doctor that Seinfeld, which she has only seen 5 minutes of in her entire life, is her favorite show. Brownie replied, “Me too. I love Seinfeld.” Cupcake made it a trifecta as he chimed in, “Yeah, Seinfeld!”
So now I’m one of those crazy homeschool moms who doesn’t supervise her children as they terrorize one another while watching sit-coms about self-absorbed New Yorkers who joke a great deal about sex and other assorted adult topics.
I’m pretty much waiting to be hauled off at any moment.
So, how was your day?